The NBA champion’s fashion choice says it all.

Fox News anchor Dana Perino caught her cohosts by surprise when she let an off-color joke slip out during a live broadcast.

Perino, who is typically more reserved than her cohosts on the network’s drive-time panel show “The Five,” made a joke during Monday’s broadcast about President Joe Biden’s recent claim that inflation had only risen “an inch” in recent weeks.

Cohost Greg Gutfeld responded to Biden’s comments first, saying that he meant to take a moment to defend the president.

“I thought that was a brilliant joke, but screw all of you. I’m always overwhelmed when Biden talks, because it’s like — it’s like the Netflix menu, so many options, and they all suck,” Gutfeld continued. “He basically said that Trump was divisive. He saw the pandemic was over. There was no inflation. We forgot that if the pandemic is over — I mean we did mention this — that means what he did with the loan forgiveness was what we thought it was: it was a trillion dollar bribe to his voters, that you and me, truck drivers, everyone else who’s making a living, has to pay for.”

“All of this stuff is exhausting,” Gutfeld kept on going. “It gives you so much material to work from it’s almost brilliant, but do we get any clarity on anything, right? Or do we just listen to an interview with some guy, whose kind of along for the ride, who’s got some opinions about the pandemic and Taiwan, and casually just throws them out there, and you have to come out and clean up after him, because no, we’re not going to go to war over Taiwan because we have this thing called strategic ambivalence.”

“He’s not really president. He’s not even present,” Gutfeld concluded, arguing that Biden had essentially been sent out to do an interview but he hadn’t truly been the one calling the shots.

“More to come on all of this, because it’s just an inch,” Perino cut in, changing her tone slightly as she added, “You know, an inch matters.”

Perino turned toward the camera then, as her cohosts groaned and laughed. 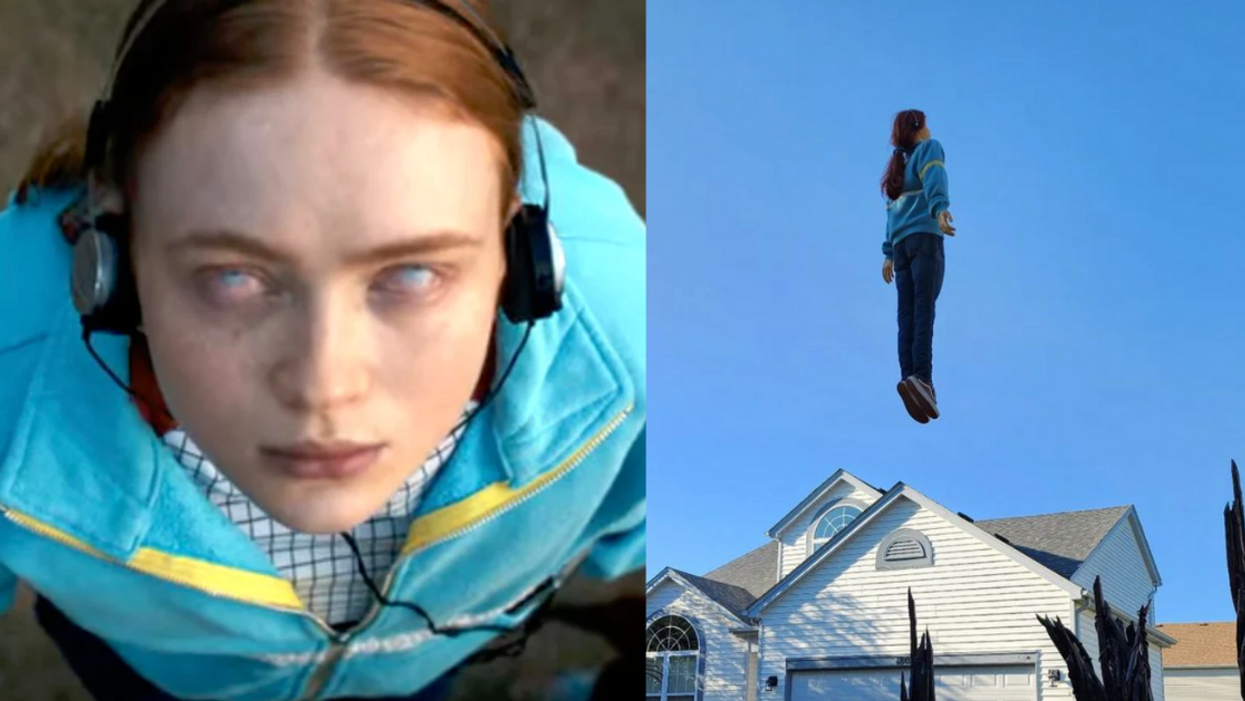 It’s perfectly fine for everyone not to be down with the spooky Halloween season.

Unfortunately, holiday haters sometimes go to extra lengths to display their holiday disdain and try to ruin the fun for everyone around them.

Plainfield, Illinois couple Dave and Aubrey Appel—who are behind the Instragram account @—went all out with a Stranger Things inspired display that recently went viral on Instagram and TikTok.

The elaborate, gravity defying display recreated the scene when the character Max is lifted into the air by the evil Vecna.

But neighbors apparently started to complain about the traffic from curious onlookers.

“Dwayne English, spokesperson for the Joliet Police Department, said officers did respond to a complaint about increased traffic due to the display about 9 p.m. Sunday.”

“‘Officers spoke to the owners of the display who indicated that they would take it down if problems persisted,” English said in a written statement.'”

‘No further enforcement action was taken or needed.'”

But the next day, the Appels posted some good news on Instagram:

Backed by the support of the public, community leaders, and even law enforcement, it was decided that the Max display could stay up after all.

As a compromise, the display will only be lit up on the weekends for fans of the hit Netflix show to come by and take pictures.

The couple also shared clips of their display to their TikTok @horrorprops.

People were thrilled the floating Max got to stay.

Even Netflix dropped a comment to praise the decorations.

You can find more details about the Appel’s Stranger Things display and other amazing Halloween decorations in the Chicago area on the Chicago Haunt Builders website.