Twitter is a yawning gyre of GIFs, random maniacs screaming into the endless void in search of a meager morsel of meaning, and dog photos. And with a gazillion tweets being posted every second, it can be hard to sift out the gems from the dirt. So in case you’ve missed them, here some of the most delightful Twitter moments of 2017.

Conspiracy theories concerning doctored footage are as old as the sound stage they filmed the moon landing on. And now, because of the internet, people are more eager than ever to call everything “fake news.” So it shouldn’t come as a surprise that this led to the moment when the internet launched the equivalent of the Warren Commission for a Tweet about a toy that was out in the sun too long.

Over the summer, Japan suffered a major heatwave, which led to the tragic demise of one Mr. Plastic Duck. If the photos provided by its owner, @shiohitoshi, are to be believed, the duck was reduced to a puddle of googly-eyed, lime-flavored jetsam in a matter of hours.

shiohitoshi/TwitterThe perfect representation of 2017, quite frankly.

The argument raged for so long that rival factions emerged: “melters” and “truthers.” Each side started presenting their own detailed proof, including artistic sketches and CGI simulations of the car’s dashboard. To reiterate, this is a plastic duck we’re talking about. Who knew the internet could invent an even dumber conspiracy theory involving melting than the steel beams in the World Trade Center.

In the end, it was settled that the car hadn’t changed and that any differences were just the result of perspective — something the internet has a habit of lacking.

What started out as an innocent exercise in helping people illustrate stories or sell products have metastasized into a bizarre art project aimed at capturing every single possible combination of human behavior with any actors and props at hand. And sometimes, that leads to series of stock photos telling some dark and disturbing tales.

Take this one, for instance. It starts off with a muscular pool boy proposing to what seems to be a wheelchair-bound widow. It’s lovely, right? It ends with her drowning in a pool.

Rob Dobi/TwitterAnother set is him peeing in the pool five minutes earlier.

Or there’s this short story of a guy robbing a pharmacy, only to be stopped by the world’s most on-edge pharmacist waving around a shotgun. Having failed, the criminal then decides to turn lemons into lemonade by at least getting his prescriptions refilled while he’s there. 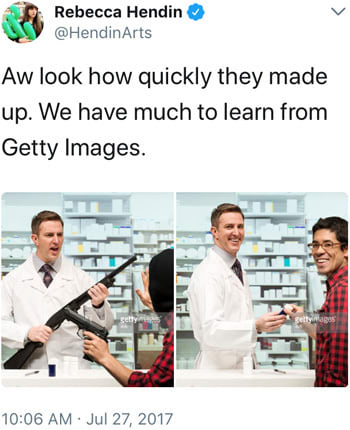 Rebecca Hendin/Twitter“NO REFILLS WITHOUT A NOTE!”

Did you like Se7en? Would you have liked it better if Brad Pitt’s part was played by a toddler? Well, stock photography has you covered! In three frames, we see a gun-wielding preschooler descend into maddened grief, but his innocence isn’t the only thing that’s dying today. 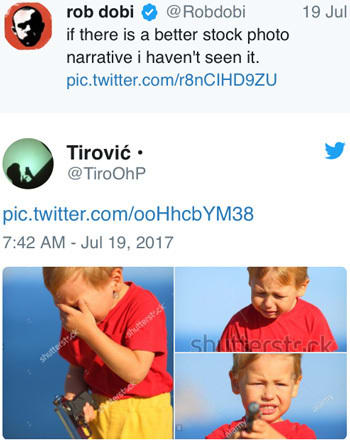 It turns out that there’s even an extended storyline for that “guy checks out girl on the street as his girlfriend looks at him angrily” meme that made you quit social media for two weeks. In it, that poor girlfriend has to continually have her heart broken again and again by her sleazeball boyfriend, only to wind up dumping him and then becoming the very thing that she hated. The cycle of lust gives no quarter.

AntonioGuillem/iStockWe’re surprised that a studio hasn’t optioned the pictures yet.

A Computer Wrote Episodes Of Seinfeld

It’s fair to say that computers are getting smarter with every passing day. Case in point: Many autocorrects now seem to they know what we’ll say in any given conversation, give or take an accidentally insane bit of rambling. So in an effort to see whether the machines could match the musings of Larry David and Jerry Seinfeld, a group of comedy writers fed Seinfeld scripts into several predictive text keyboards (one for each of the main characters, along with one for stage directions) and let ‘er rip. Surprisingly, the result was a pretty faithful reproduction of Seinfeld, albeit written by someone in the grip of a crippling mescaline and tequila addiction.

As The AV Club notes, it hits a lot of the same notes as the original show did. You can easily imagine Kramer bursting into the apartment dancing with a garbage bag, George calling himself the “captain of hygiene,” or Jerry killing it on stage with his timeless bon mot “What’s the deal with this ping pong guy?”

For many, 2017 was a dark, scary time in their lives. The world once again seemed like it is filled with hate and small-mindedness, as we saw many of the monsters of old creep back into our view. So what better way than to fight the darkness than by taking two of the scariest movie monster ever to slither on our screens and make them positive, loving role models of the LBGTQ community?

In 2014, the world was introduced to the horror of the Babadook, a vicious monster that lives for attention, killing, and psychologically scarring anyone who refuses to believe in him. After noticing that Netflix had accidentally placed the film in its “LGBT Movies” category, the type 2 free thinkers of Tumblr ironically rehabilitated him as a figurehead for the LGBTQ community, complete with his own catchphrase.

But that wasn’t enough for the internet, not by a long shot. So when the remake of the horror classic IT came along, Twitter was ready to take the meme to reach its final form. And so the internet thrust the Babadook into a fulfilling relationship with Pennywise the Clown, a pairing referred to by some as “PennyDook,” a terrible name that will eventually become the terrible title of a movie we’ll go watch on day one.

Kumi‏/TwitterTale as old as time, Song as old as rhyme, Babadook/Penny

One of the major criticisms of Hillary Clinton during the 2016 presidential election was that she was just wasn’t relatable enough. America simply wasn’t ready for the first president who wouldn’t be able to pass the Voight-Kampff Test.

PBSPersonally, we blame the uncanny valley.

Being rejected on a perceived lack of humanity must be very painful (unless you’re a robot, naturally), and was an important element of Clinton’s introspective memoir What Happened, a scintillating postmortem of a failed election in which the culprit was identified as every other human being to have ever existed except herself. The book also details many of the tough choices Clinton had to make throughout the campaign, doing things she often considered pandering just to get more votes. For instance, take that time she was campaigning in Oklahoma, a deep red state. In a desperate attempt to appeal to local voters, Clinton remembers sacrificing a bit of dignity by dressing up as a cowboy, firing two revolvers into the air, and, as we all remember, executing a cattle rustler right there on the stage.

It’s that this point we should clarify that this didn’t happen. The above page was nothing but a bit of surrealist madness from “Milkshake Duck”-termer and Very Funny Twitter Account @pixelatedboat. But you were convinced for a second, weren’t you? Admit it.

Barely a day later, Twitter was being flooded with “Is this real?” replies which Boat posted, probably while pinching the bridge of his nose for several seconds. Certainly, the dumber parts of the internet were more than willing to believe Clinton had added another innocent life to her quite impressive body count.

What is the internet good for if not making scary things less scary? Like with Pennywise plush dolls, for example.

If you loved this article and want more content like this, support our site with a visit to our Contribution Page. Please and thank you.